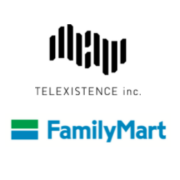 This significant collaboration was made possible through Japan’s Ministry of Economy, Trade, and Industry’s “Task Force to Promote the Construction of Robot Implementation Models,” an initiative that FamilyMart has been an active part of since November 2019, in a committed attempt to transform operational infrastructure through robotics.

Telexistence’s robot will be installed at the “FamilyMart Ministry of Economy, Trade and Industry Store” located in Kasumigaseki, Chiyoda-ku, Tokyo. The semi-autonomous remote-controlled robot* will first perform shelf-stocking operations, beginning with remote-controlled operations in the beverage section, starting with the stocking of PET bottle beverages and other high-volume items. This first stage will help verify the speed and accuracy needed to accelerate more advanced functionality.

As the collaboration advances beyond the pilot phase, Telexistence and FamilyMart aim to successively introduce the system across FamilyMart stores nationwide. Closely tied to FamilyMart’s core company value – “Where You Are One of the Family” – the retail chain aims to ensure utmost efficiency in its performance, while remaining ever-connected to its valued customer community.

About Telexistence:
Telexistence is powered by a development team constantly advancing  and curating cutting-edge hardware, software, and automated technology in-house to materialize a vision of more connected humanity, interacting and evolving across multiple spatial and temporal scales. Interested in joining us? Visit https://tx-inc.com/en/career/ to learn more about our open roles.

Telexistence raises $20M (22-oku JPY) in Series A2 round of funding. Pioneering...
Scroll to top