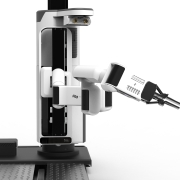 TX SCARA was created to do the specific task of restocking refrigerated shelves with bottles and cans, a repetitive, tedious job generally performed by employees in often uncomfortable settings. TX SCARA can be in operation 24/7, replenishing shelves at a pace of up to 1,000 bottles and cans per day, relying almost completely on its AI system (known as “GORDON”) to know when and where products need to be placed on the shelves.

Tomohiro Kano, General Manager of Store Development Department and Railway and Corporate Franchisee Department, of FamilyMart, commented, “The decline in Japan’s labor population is one of the key management issues for FamilyMart to continue stable store operations. The introduction of Telexistence robots into FamilyMart stores will eliminate the need for store employees to replenish beverages in refrigerators, and the newly created time can be reallocated to customer service and shop floor enhancement, leading to higher quality store operations.”

Kano concluded, “We will continue to work with Telexistence to create a new way to operate stores.”

This initiative is a small step toward realizing Telexistence’s mission of improving all simple labor workflows in human society with robots. Telexistence is promoting this initiative based on a collaboration with NVIDIA and Microsoft Japan. Specifically, NVIDIA GPU-accelerated AI technologies are embedded in hardware originally developed by Telexistence to provide AI and remote control of robots via Microsoft Azure platform.

“Currently, the greatest limiting factor for any industry, in any nation, is human resources. Especially in developed countries like Japan, the shortage of human labor is rapidly becoming apparent in the retail and logistics industries, which support human life in society,” said Jin Tomioka, CEO of Telexistence. “We are promoting large-scale production and social implementation of our robots for industries other than factory automation, industries that function as the infrastructure for daily life in society. We also will bring our automated labor solutions to other regions, such as the United States.” Tomioka added, “Telexistence’s robots will become a powerful influence, providing a virtually inexhaustible supply of new labor. The new surplus resources will be appropriately redistributed through market mechanisms, and in the long run, this can lead to the transition of human society to be significantly augmented by automated labor.”

TX SCARA is autonomous with GORDON during normal operation. In rare cases where the AI encounters issues due to miscalculation or external factors such as an item falling or being out of place, remotely located Telexistence employees using VR glasses take control of the robot to correct issues across stores. Each TX SCARA can replace one to three hours every dayof human work at a single store.

“Moving from proof-of-concept to mass production of 300 remotely-operated robots with deep AI capabilities is a major step forward,” notes Dr. Lewis Pinault, Airbus Ventures Partner based in Tokyo. “As an early investor of Telexistence, we are thrilled to see the company’s diverse, richly talented team begin to take flight, rolling out their advanced technology across Japan and activating new channels in support of their future expansion in North America.”

Tomoko Mikami, Managing Executive Officer, Small Medium & Corporate Business, Microsoft Japan Co., Ltd.:
“Microsoft Japan will be collaborating globally with Telexistence in terms of cloud platform and business development in the implementation of Artificial Intelligent Robotics for qualitative improvement of industry, as promoted by Telexistence. We are pleased that our platform can contribute to this project, and Microsoft will continue to support the project to make a significant impact not only in the Japanese market but also on a global scale.”

TX SCARA is powered with the NVIDIA Jetson TX2 module on the head unit which is utilized to transmit video inputted from the camera. Furthermore, the NVIDIA Jetson AGX Xavier module installed at the foot unit attains autonomous operation functions using AI. For example, the TX SCARA is designed with a strong arm and a camera angle so that the same robot hand can grab all types and shapes of beverages sold at convenience stores. Furthermore, NVIDIA Jetson AGX Xavier improves functionality by running image recognition neural networks in parallel, such as recognizing optimal gripping points that differ from beverage to beverage.

TX SCARA monitors beverage inventory availability 24 hours a day. While receiving this, the AI system “GORDON” predicts and schedules product-display timing and instructs TX SCARA to refill beverage stock. NVIDIA DGX Station, an AI workstation, was adopted as the training environment for GORDON. By simulating product displays in a variety of patterns, it can create an efficient and optimum image recognition model.

If the AI display fails because of an unanticipated environmental change, TX SCARA will shift to Telexistence mode (remote control) and a remote-control operator will make corrections via VR operation. “VR sickness” can occur when there is a misalignment between vision and body senses because of delay in 3D video transmission. In order to prevent this, the system uses NVIDIA’s powerful GPU-accelerated compute capabilities for advanced image processing performance, which enables video transmission at a maximum speed of 50 milliseconds (*).

*: The amount of time (including network delay) that elapses between when the video is inputted into the robot camera and when it is displayed at the operator’s display. A “millisecond” is a thousandth of a second.

TX has selected Microsoft Azure as the cloud platform for the robot solution service by TX SCARA and is using it for the robot’s task management system.

*: A task is a display task such as “Pick up products from point A and place them at point B.”

*: Data on products displayed, date and time of display, and number of units.

■ Collaboration in the U.S. Market Entry

TX and Microsoft will strengthen our cooperation in business development overseas, especially in the U.S. market, by leveraging Microsoft’s global corporate customer network and its global startup support program.

Telexistence is strengthening its R&D, Business Operations, and Corporate organizations to move forward at an accelerated pace as the business enters a growth stage. Please see below for current open positions.

See Careers Page for more details about each position.