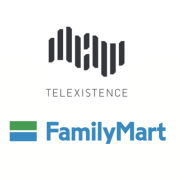 TX SCARA was created to do the specific task of restocking refrigerated shelves with bottles and cans, a repetitive, tedious job generally performed by employees in often uncomfortable settings. TX SCARA operates 24/7, replenishing shelves to completely removes the task from the store staff. The introduction of Telexistence robots and its AI system will create time surplus without adding employees, and the time can be reallocated to customer service and shop floor enhancement, leading to higher quality work environment and store operations.

Bundled with the robot, Telexistence will also introduce the workflow analysis tool “TX Work Analytics” into FamilyMart stores. By having store staff wear the location information transmitter, this tool visualizes the types of in-store tasks and workload by time of day. TX Work Analytics will enable optimization of work schedules and staff allocation in the environment where the AI robot performs the shelf restocking tasks in the back storage areas.